And Africa > ARTICLES > The argument for startups and entrepreneurship in Africa

According to Credit Suisse’s 2018 Global Wealth Report, total global wealth reached 317 trillion dollars in 2018.
Over 90% of this wealth is concentrated in the “three poles” of the global economy – North America (primarily the United States), Europe, and East Asia (primarily China and Japan).
The “global south” accounted for less than 5% of the total amount despite having over 50% of global population.
The entire continent of Africa accounts for less than 1% of the total (1).

At the same time, the African continent is undergoing rapid population growth with population expected to more than double to 2.5 billion by 2050, with over 840 million youth under the age of 25 (2).

The second half of the 20th century and the first 20 years of the 21st have been characterised by both rapid population and economic growth in Asia. Starting with Japan, followed by the Asian tigers of Hong Kong, Singapore, Taiwan and South Korea, and more recently and dramatically the rapid rise of China, a number of Asian countries have been successfully able to capitalise on their demographic dividend to rapidly industrialise and kickstart economic growth.

This growth has been accompanied by a rapid decline in poverty across Asia – the scale and speed of which are unprecedented in human history (3).

Recent reporting by the New York times suggests that intergenerational mobility is higher, inequality lower, and perhaps most importantly, optimism more widespread in China than the United States (4).

Most economic indices now clearly indicate the locus of global economic and wealth growth has shifted from the United States and Western Europe to Asia.

Similarly, the IMF forecasts Indian economic growth to overtake even China at over 7% for 2018 and 2019, with associated socioeconomic indicators such as maternal mortality, social mobility, extreme poverty and unemployment showing distinct, although less dramatic improvements (5).

In sharp contrast, despite periods of rapid economic growth, African countries have failed to show consistent improvements in socioeconomic indicators with per capita incomes often failing to keep up with rapid population growth. World Bank research released in 2018 indicates that although the rate of poverty has decreased across most of Africa, the absolute number of people in extreme poverty is higher today than it was in 1980, with over 200 million people living on less than $1.25 per day (6). Similarly, Brookings Institute research indicates that Nigeria has overtaken India as a locus of extreme poverty – a shocking statistic given the 7x difference in population (7). 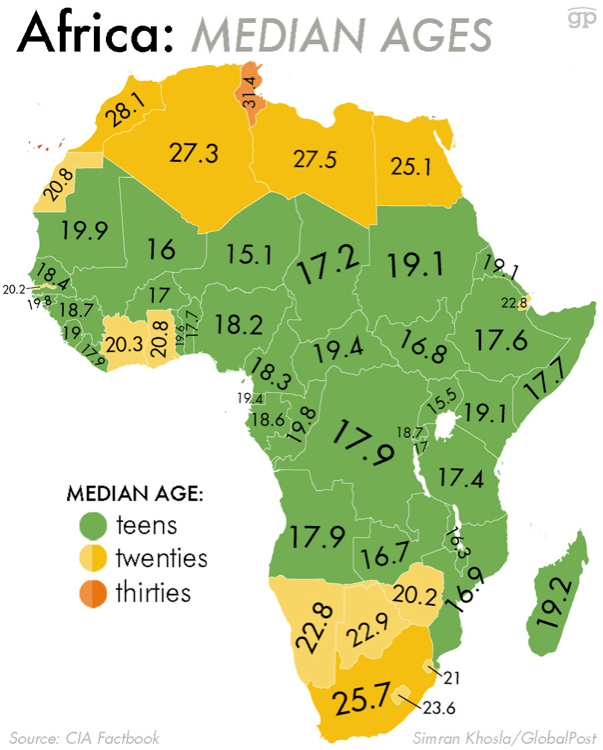 The median age in most sub-Saharan African countries remains below 20, with the average for the continent as a whole at just 19 years (8).

A rapidly growing, youthful continent with stagnant incomes and increasing poverty levels has led many policy makers, demographers and economists to warn of increasing civil unrest and political instability across the continent.

Perhaps most concerningly, economists including Ha-Joon Chang have argued that the path to economic development available to Western countries and developing Asia has become closed to African countries – the ladder has been kicked away.

This is a result of both deliberate action – the proliferation of global rules and norms against active government intervention enforced by organisations like the IMF and WTO – and through technological advances and mechanisation that have rendered the labour-intensive industrialisation process pioneered in East Asia unviable (9).

Given this economic reality, what are concerned actors, African states, and Africans themselves to do in order to foster sustainable economic development at a scale that can pull millions out of poverty?

One solution is to utilise the youthful dynamism and entrepreneurial nous of people living on the continent – a solution driven by local people with local ideas rooted in their communities.

Entrepreneurial activity runs among the highest in the world, with 5 African countries in the top 10 globally, according to research by the Global Entrepreneurship Monitor (10):

Yet, high levels of entrepreneurial activity have failed to create significant employment or revenue generating companies. Indeed, the African Union has stated that “the continental trend is one of resilient but jobless growth”.

As the most populous country on the continent, Nigeria is again an instructive case – with a working age population of over 100 million (up 80.6% over the last 10 years alone), and steadily increasing GDP (up 26.9% over the last decade), living standards have actually declined for the majority of its population, with its Sustainable Economic Opportunity (11) score declining by 0.1% over the last 5 years (12).

Why has growth been “jobless”, and more importantly what can be done to in order to create stable growth in employment and sustainable economic opportunity? One answer is scale. The overwhelming majority of entrepreneurial activity in Africa occurs in the low-tech informal sector. Close to 90% of all African jobs outside the agricultural sector are in the informal sector – characterised by instability, low wages, lack of employee protection and unsafe working conditions (13).

Even in the comparatively well remunerated and growing tech startup sector, particularly strong in South Africa, Kenya and Nigeria, the number and scale of businesses remains extremely small. An analysis by VC4A of the South African tech startup ecosystem, the most advanced on the continent, indicates that 41% of South Africa-based startups generate no revenue at all, with only 6% of companies generating more than $500 000 in annual revenue (14). The tech sector in Cape Town – the largest in the continent – employs only 40 000 people (15). Of the 294 unicorn companies globally (private companies valued at more than $1 billion), Africa has only 3 – Cell C and Promasidor in South Africa, and Jumia in Nigeria, of which only Jumia could be considered a tech unicorn in the traditional sense (16). By contrast, China has over 100. Given the small number of large, globally competitive companies in the formal sector outside of South Africa, it is critical for African countries to create more unicorns and in the process generate sustainable employment.

Next week’s article will cover the critical shortage of funding in the African startup sector, and discuss the scope for increased cross-border financing from Asia.