Trends of co-working space in Africa

And Africa > ARTICLES > Trends of co-working space in Africa

Trends of co-working space in Africa

Looking at the number of co-working spaces by country, three countries stand out specifically – Nigeria, Egypt and South Africa.
They are then followed by Tunisia, Kenya and Morocco. 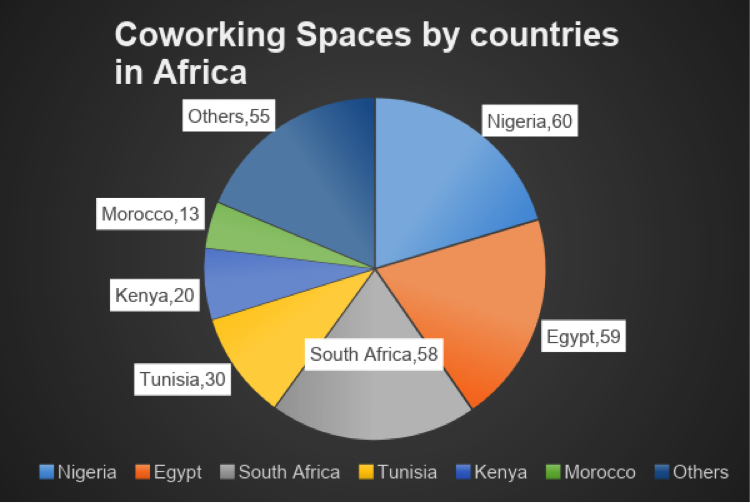 So why do African entrepreneurs use co-working spaces?
Of course, like developed nations, there are some typical reasons such as “We want to save the expense of renting or buying an office” or “We want an environment where we can complete with other entrepreneurs”.But that’s not all.
In Africa, especially in areas where the infrastructure is not in place, there is a high need for a “secure reliable supply of electricity and securing of the communication environment”.So we’d like to look at the cases of co-working space in South Africa, Nigeria and Kenya.※※※※※※※※※※※※

Next, I will introduce “Hub 30” which is a co-working space established in February 2018 at Lagos, Nigeria.There is a monthly plan that allows for use of this space at any time, and can use mailboxes as well.
Furthermore, there’s a one-day plan where one is charged for only one day of usage.
There are some low price plans such as “₦15,000 (approx. $40) monthly plan” and “₦1,000 (approx. $3) one day plan”.
Open collaborative working space and private spaces for individual work are secured, and free Wi-Fi, a constant power supply, and printing service are also included.It’s one of the new co-working spaces so it might be a good example showing Africa’s co-working space business development.

Finally, I will introduce “iHub”, a co-working space in Nairobi, Kenya.
It is a space that started in 2010.
They relocated in 2017 and have doubled in size from their previous location.
The new space features restaurants and grocery stores.

Events are often held for users as shown in the photo.Not only a co-working space, iHub also has an investment function in cooperation with AIF (Africa Innovation Fund) as well as providing consulting business for start-ups.
From the fact that Google, Microsoft, IBM and others are big partners, it can be said that the service performance and the credibility of iHub seem high.The founder of iHub, Erik Hersman is a person who has been leading the Tech industry in Africa.

In addition to iHub, he has developed a service for new sharing on mobile devices called “Ushahibi”.
He is also the founder of “BRCK”, a company that manages Wi-Fi spots with outstanding features such as waterproofing and solar power generation.※※※※※※※※※※※※As you can see from the three co-working spaces, there’s no big difference in terms of quality even compared to those of developed countries.On the other hand, from the perspective of users of these spaces, and number of problems have been raised.
“Sometimes events are held in the shared space, so you cannot use it at that time”
This seems to be a similar problem to co-working spaces in Japan and other developed countries.

“There are many co-working spaces in the center of the city, so traffic jams are serious”
This is unique to Africa, but it’s difficult to resolve without the cooperation of co-working space management.

Co-working spaces from now on

Following the trend of increasing operation of co-working spaces, the number of office sharing management companies can also be expected to increase.
In addition, the potential for involvement of the real estate industry, which is a peripheral industry, has also expanded.

※※※※※※※※※※※※
In this way, co-working spaces in Africa have a quality that is no different from that in the rest of the world.
So, if you have a business in Africa, using a co-working space is absolutely an option to consider.
Working in a secure environment and interacting with local entrepreneurs, you should have many opportunities to advance your business.